Since my last blog post quite a lot has happened which I will be telling you about in future posts as it becomes relevant (or not!).

One big thing that has happened is I have been given full membership of the Sussex Guild. The first year you are given membership on a probationary basis and then it is decided whether to give you full membership or not. My probationary year was extended as my stand was not deemed to be up to standard, this was told to me at the Michelham show, you can see what my stand looked like here. In that post you can also see my stand as it was at the next show at Pashley Manor

Anyway I digress, a little bit before the latest show at Hurstpierpoint I received an email out of the blue telling me that the selection committee had given me full membership. To say that I was shocked is an understatement. Something else that I did not realise is that you receive a certificate of membership. This was given to me at the Hurstpierpoint show, its even laminated!

As you can see in the photo above my stand is moving forward, I have a few more smaller pieces in my range including a few that are not shown here but I will show those to you in upcoming posts.

Hurstpierpoint was the last Guild show for me this year so now I can spend some time filling in the screw holes and repainting the boards so that next year I can hang the frames that I have then in a different way.

I think thats enough stand talking and good news for one post.

In August I exhibited my work at two Sussex Guild shows. The first being at Michelham Priory on the first weekend of August and the second at Pashley Manor this weekend just gone. Both were long shows (4 and 3 days respectively) and exhibiting at something like that is very tiring but lets you see what other people think of your work.

When you work in isolation, as I do, making the things that you think of in your head and finding sometimes very random inspiration it is great to see what other people see in your work and what they think of it. I even had one couple argue as both liked different frames and would not concede to the others opinion! Everybody brings their own life experience to looking at your work and will therefore come at it from a different angle, I find it fascinating when they explain to me what they see in my work.

How people look at your work is very much linked to the way in which you present it I think. I have struggled since I joined the guild to present my work in the right way but I think that I am finally getting there.

The first image is my stand at Michelham Priory, which is in itself a vast improvement on that which I had for my first two guild shows last year (same basic stand but different coverings) the fabric I used to cover it back then didn’t have the desired ‘look’ so it was suggested that I paint the boards white as seen below.

This gives the whole stand a much cleaner feel and lets people look at the frames rather than the fabric. I did have way too many comments on how lovely the fabric was before!

It was then suggested that the frames may look better being on a colour so as to show how they might look hanging on someones wall in their house, more people have coloured walls than white ones I would think. To keep the flexibility of the stand the colour could be put onto large panels which hang from the back boards so that I can alter the number and colour of panels as I see fit. This you can see in the image below.

By the way my carving bench is not about to fall over even though it looks like it in this picture!

I think that the frames look an awful lot better on these panels, I had several compliments on the stand and the public spent their time admiring the frames not the background!

Finally I think that I am getting there, there are a few minor adjustments that need to be made to the stand but the majority of it is now going in the right direction.

What do you think? Let me know in the comments below

These are the pictures I took as I built up my stand at The Sussex Guild show at Pashley Manor Gardens over the Bank Holiday weekend at the end of August.

The system that I ended up using was suggested to me by another member of the guild and worked incredibly well. Below is the first image showing the stand as it was first put together on Friday morning. 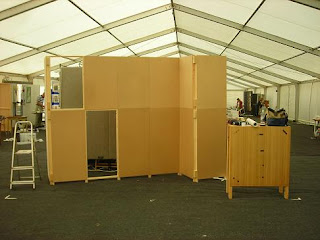 I decided that I did not want to have the MDF used as the final finish for the screens so I had worked out beforehand that I would cover the screens once built with wallpaper as I had run out of time to paint them.

Below is the result of the 3 hours it took me to wallpaper the screens. It looks a lot better in the picture than it did in real life and I thought I had completely wasted my time and was close to panicking. I also realised that the screen was not big enough for the allocated space and I went back to the workshop that evening and made some more frames but I did not have any more MDF boards to cover them. As the frames were going to be hung from chains from the top of the boards I thought it would not matter too much. 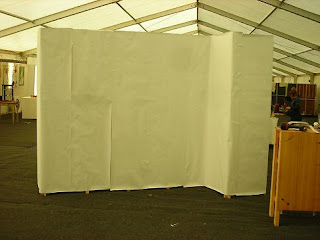 My next thought was the covering as I was really unhappy with the papering, the next quickest thing would be fabric, unfortunately I could not get back to the fabric shop I use before it closed. Then I remembered that I had some fabric at home, it took me quite a while to iron the fabric pieces without knowing whether they would be enough to cover the screens.

When I got back to the stand on Saturday morning I tried out the fabric and found out that the lighter velvet fabric was too short when hung lengthwise, but as I had 4 pieces I hoped they would work hung sideways which is what you see below. 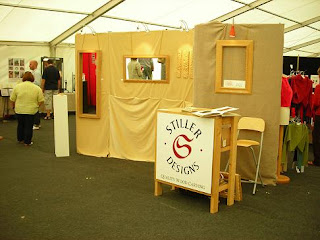 This ended up looking a bit straggly but there was nothing to do as it was time for the show to open. On Sunday morning I rearranged the pinning of the fabric and I feel it was a lot better. The two photos below show the stand on the final day with the two frames I finished over the weekend on show. The third frame that I carved has since been glued together and is awaiting finishing. 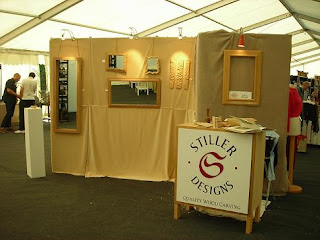 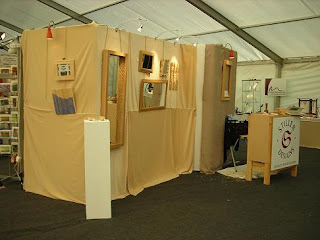 I still think there is more work to be done before my next Guild show at Hurstpierpoint at the beginning of November, mainly with the fabric covering.

I’m hoping that the weather tomorrow will be good and I can get some pictures of the frames so that I can update my website.